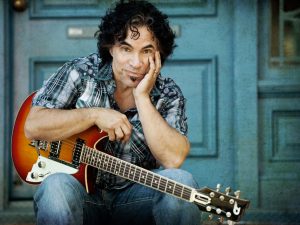 The Wire & Wood Alpharetta Songwriters Festival (October 7 & 8, 2016) is a nationally recognized singer-songwriters in historic downtown Alpharetta where many songwriters will gather and perform their original songs. Music lovers are given a chance to look behind-the-scenes at the artists and stories that inspired so many blues, country, rock, Americana, and bluegrass songs. There is also a quite interest from high school students who are interested in this kind of career, says Chris from the online Dream Career portal.

Visitors can enjoy the work of nationally recognized veteran artists as well as local up-and-coming music talent as their songs fill downtown Alpharetta’s streets.
This year’s lineup includes many great names, but one in particular: John Oates. Let’s learn a little more about this influential musician:

It was John Oates’ destiny to become a musician. He played the guitar from the age of five, and he started to sing from the day he could talk. His calling in life never was in question. John William Oates is an important American R&B, soul and rock musician, guitarist, songwriter and music producer who reached to fame as part of the soul and rock duo, Hall & Oates.

John Oates was born in New York City on April 7, 1948, and in the early 1950’s, he moved with his family to a small town just outside of Philadelphia, Pennsylvania. That move would forever change the course of his musical life, as the impact of early of rock&roll was leaving a lasting impression on John, like so many other kids. At the age of just four, John witnessed Bill Haley and the Comets perform their classic rockabilly hits live at an amusement park. He would never recover….

Then came the days of the records…John started to collect 45 rpm singles, such as the treasures from Chuck Berry, Little Richard, the Everly Brothers, Gary U.S. Bonds, Conway Twitty, and, of course, from Elvis Presley. The young John Oates was spending countless hours while twisting his AM transistor radio’s dial when he tried to tune in to local R&B and rock&roll stations to listen to DJ’s like Jerry Blavat who was constantly spinning the B sides of the records and obscure Doo Wop music.

John wasn’t so much influenced by merely the top-40 hits, and an older brother of one of his friends made him enthusiastic about the folk music that started to sweep America during the early 1960’s. John started to get interested also in traditional American music and he began to discover the beauty of Appalachian Scotch-Irish folk ballads, Mississippi delta blues, and bluegrass. He became a great fan of the ragtime guitar styles that were performed by newly rediscovered folk singers and bluesmen who performed at the Philadelphia and Newport folk festivals.

In those days, John also attended shows at the famed Uptown Theater where he heard R&B legends like Sam & Dave, Otis Redding, The Temptations, Smokey Robinson & the Miracles, and Curtis Mayfield. He was absorbing all these different influences and began to developed a sort of split personality when it came to music. One night he could be heard playing his acoustic guitar solo, in some local cafe, playing folk and blues songs, and the next day he could, together with his band, be playing Doo Wop or the big R&B hits of those days. Well, to this day you can hear those very same influences and roots in John’s music, his original songs, and his distinct singing style.