A few years ago, Georgia music said farewell to two of its greatest legends with the passing of Bill Lowery and Ray Charles. Lowery and Charles were the first two inductees of the Georgia Music Hall of Fame in 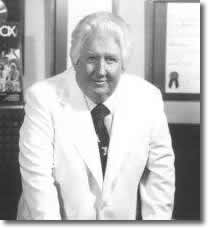 1979 and died days apart from each other. Lowery passed away on June 8 and Charles followed on June 10, 2004. Although their passing sent the music world mourning, their amazing careers and accomplishments are celebrated (and heard) around the world through their musical legacies.

William “Bill” James Lowery, Jr. was born Oct. 21, 1924, in Leesville, La. The radio industry brought Lowery to Atlanta from Louisiana in 1946, where he started station WQXI-FM and coined the phrases like “Quixie in Dixie” and “Eyewitness News.” It was in 1952 that Lowery started Atlanta’s first music publishing company and soon became a major force in music industry circles.

In addition to being a music producer, Lowery opened the famed Atlanta studio, Southern Tracks Recording. His Lowery Group office is lined with his legacy of gold and platinum records and numerous awards of a career that spanned 52 years and 7,000 songs. In 1977 Lowery established a scholarship fund at the Georgia State University School of Music. He was also instrumental in the building of the Georgia Music Hall of Fame in Macon and continued to be involved with the annual induction. Lowery died in Atlanta after a four-month battle with cancer. He was 79.

Born Ray Charles Robinson on Sept. 23, 1930, in Albany, Ga., the man known as Ray Charles became one of the most influential musicians of the 20th century. He began playing piano at the age of five, but he developed glaucoma and lost his sight by seven. He attended the State School for the Blind in St. Augustine, Fla., where he learned to read and write music in Braille and play piano, organ, clarinet, and trumpet.

At 15, he left Florida and began to pursue his career as a musician. He dropped his last name and became Ray Charles to avoid confusion with the famous boxer “Sugar” Ray Robinson. In 1953 he signed a deal with Atlantic Records and soon began making a string of hits. His recording of “I’ve Got a Woman” blended the soul of black gospel music with secular lyrics, and the song’s popularity, among black and white audiences, launched Charles’s career. What was known as “race music” became “rhythm and blues,” or “soul music,” and American music was permanently altered. “What’d I Say,” was the next hit to follow and success moved swiftly for Charles from that point on. In the sixties, Charles made a string of country and western recordings. He also recorded “Georgia on My Mind,” which immediately went to number one on the charts (the first for Charles) and became a favorite for Georgians and non-Georgians alike. In 1979 Charles performed before a joint meeting of the Georgia Senate and House of Representatives when “Georgia on My Mind” was designated the official state song.

In 1985 he told the Atlanta Journal-Constitution, “Here’s a little kid who came up in the South walking barefoot and wearing short pants, and then he sings this song, and one day in 1979 it becomes the state song. Can you imagine the whole Georgia legislature standing up for me? I cried . . . That’s how much it meant to me.”

Charles released more that 100 albums in six decades. He channeled most of the major elements of American music –gospel, country, jazz, rhythm and blues and the beginnings of rock. Charles played 200 concerts a year into his seventies and toured up until last year when a dislocated hip kept him from traveling. Charles’s last public appearance was alongside Clint Eastwood on April 30, when the city of Los Angeles designated the singer’s studios, built 40 years ago in central Los Angeles, as a historic landmark. Charles died from acute liver disease at his home in Beverly Hills. He was 73.

To recognize the incredible lives of these legends, the Georgia Music Hall of Fame put together tributes in their honor. Ray Charles was remembered with a memorial in the museum’s lobby that included photos of the singer and his music playing throughout the building. Note cards were available for visitors to write condolences which were mailed to Charles’s family. In memory of Bill Lowery, the Georgia Music Hall of Fame worked with GMS Productions to produce a one-hour radio special, “A Tribute to Bill Lowery.” The broadcast showcased 14 of the Lowery Group’s biggest hits and included excerpts from two interviews with Bill Lowery and comments by many of the artists who were part of the Lowery organization. The special aired on 12 radio stations throughout the state.

From all of us who love Georgia music, to the two men who made it happen, this issue of Backstage is dedicated to the memory of Bill Lowery and Ray Charles.