This post tells you the story of the Georgia Music Hall of Fame. The state of Georgia has produced a musical dynasty whose contributions shaped and defined American music, including the “Father of Gospel Music” Dr. Thomas Andrew Dorsey; the “Mother of the Blues” Gertrude “Ma” Rainey; the “Godfather of Soul” James Brown; the “Architect of Rock-n-Roll” Little Richard; the “Father of Commercial Country Music” Fiddlin’ John Carson; the “First Lady of Contemporary Christian Music” Amy Grant and the “First Family of Bluegrass Gospel” The Lewis Family.

Over 30 years ago, one of Georgia’s most loyal music fans took the first steps to preserve and honor the state’s rich musical heritage. In 1979, then Lt. Gov. Zell Miller appointed the Senate Music Industry Committee to begin work on a Hall of Fame. Two years later, a private organization, Friends of Georgia Music, with the support of the Senate Committee, produced the first Georgia Music Hall of Fame Awards Banquet and inducted Ray Charles and Bill Lowery.

In 1983, Georgia Public Television began broadcasting the Georgia Music Hall of Fame Awards live and has done so annually since then. In 1989, the Awards ceremony found a permanent home in the Thomas B. Murphy Ballroom of the Georgia World Congress Center in Atlanta.

In 1989, Macon was selected as the site of a future Hall of Fame museum because of its central location in Georgia and its amazing music history. From 1955 to 1962, Little Richard, James Brown, and Otis Redding all catapulted out of the city to international fame. Young entrepreneur Phil Walden founded Capricorn Records in Macon in 1968, and his roster of groups including the Allman Brothers Band, The Marshall Tucker Band, and Wet Willie.

Economic and feasibility studies determined that a Hall of Fame museum could serve as an anchor to develop downtown Macon into a significant tourist destination, and generate a positive economic outcome for the city and the state. In 1993, the General Assembly approved the sale of $6.5 million in general obligation bonds to pay for the construction of the Georgia Music Hall of Fame.

After four busy years, which included design, construction, fundraising, collection of archives and even a catastrophic flood in Central Georgia, the museum opened its doors to a wildly enthusiastic crowd of 1,200 at the Grand Opening Celebrity Gala on Sat., Sept. 21, 1996. The building formally opened for business on Sun., Sept. 22, when Gov. Zell Miller cut the ribbon to the Georgia Music Hall of Fame.

Since then, visitors from over 40 countries have toured the Hall of Fame and attended its diverse schedule of events and programs. Undoubtedly, the most frequently heard comment by visitors is, “I didn’t know all those people were from Georgia!” No other state can claim as many groundbreakers and superstars in every musical genre. 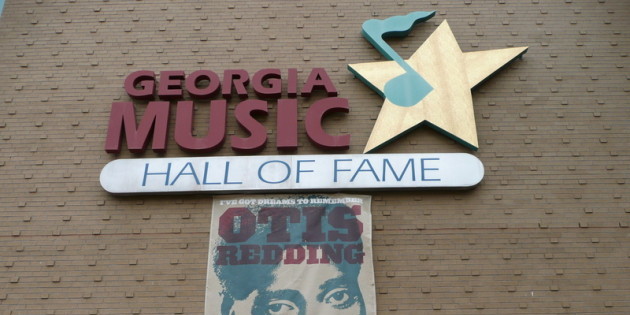 Alternative music and the ’80s will forever be associated with Athens, the sleepy college town
that fostered the careers of mega-groups R.E.M. and the B-52’s and today provides an artistic haven for artists like Vic Chesnutt, Widespread Panic, and Kevin Kinney.