In the mid-1990s, while touring to support her ‘Just For You’ CD, Gladys Knight would say to her audiences, “I know a lot of the young artists look at me and wonder, ‘What you still doin’ here?'”.  We knew what she meant. Gladys was a middle-aged woman who cut her first record in 1958–when television was relatively new. Yet here she stood, so many decades later, still recording, still packing theaters year round and still sending folks home happy. So check out this tribute to a Soul Legend – Gladys Knight. 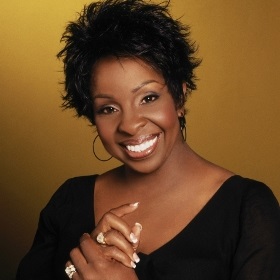 In the annals of rock and soul music, she was one of a select few. Gladys’ answer to the question of her endurance was, “Well, I know somebody.” the implication, of course, was that her faith and relationship with God had brought her this mighty long way. But there is another answer. It is simply the Voice.

Gladys’ voice doesn’t scale the highest heights. It isn’t the prettiest instrument. She’s not given to elaborate melisma embellishments or frequent falsetto flourishes. As Gladys herself has noted, those aren’t the most important things. What counts is the ability to make a listener feel something. Just a few bars into her rendition of “I Will Survive” she delivers the line ‘I learned how…to get along’ and then draws spontaneous applause by simply intoning ‘Ooo-ooo-ooo’. She fills those three syllables with more meaning than some vocalists put into whole songs. When Gladys sings, we feel it.

Like many soul-singers, Gladys began performing in a Baptist church. She has said that her late mother Elizabeth felt that she had a gift. At age four, Gladys was touring Atlanta, GA, as a soloist. The story is well known by now. Elizabeth Knight arranged to have her audition for the popular Ted Mack Original Amateur Hour TV program. Eight-year-old Gladys eventually won the $2,000 Grand Prize in 1952. A singing group was formed a few years later comprised of Gladys, her brother, her sister and several cousins. As for a name, “We thought of all kinds of flowers and things, but nothing seemed to catch everybody’s fancy,” Gladys has said. So they named themselves after their cousin and manager James “Pip” Woods. Check also this post about Bill Lowery and Ray Charles.

The first taste of recording success was the #1 R&B single from 1961, “Every Beat Of My Heart”. Gladys was only sixteen-years-old but vocally she was all woman. Lean times followed that early triumph. Such are “the going ups and the coming downs” of the music business. By 1965 cousin Eleanor and sister Brenda had dropped out of the group. Working with vocal coach Maurice King and choreographer Cholly Atkins, the remaining quartet continued honing their skills. The hits may have been in short supply but a razor-sharp live show kept the gigs coming. Brother Bubba (Merald Knight), Cousin Ed (Edward Patten) and Cousin Red (William Guest) became a spinning, dipping, quickstepping, harmony machine that was the envy of other acts on the “chitlin’ circuit.”

In 1966 Gladys Knight and The Pips signed a contract with Motown Records. Though the group felt they were not given the support they deserved at Motown, Gladys puts it like this, “We eventually got what we came for.” And that would be hit records, dates at the top venues and household recognition. I bet Bob Richardson would have liked to produce her songs!

A listen to Gladys’ pre-Motown (and even some of the early Motown) recordings reveal that her craft had to evolve. In the early sixties, her low and middle registers are buttery warm and secure. However, her belting is at times ill-focused and unsteady. But by late 1968 her transformation was complete. On “Friendship Train” she is an awesome, galvanizing force. On 1971’s “If I Were Your Woman” Gladys demonstrates the kind of singing that, in the words of Mariah Carey, “will break your heart.” Has the sweet sorrow of good-bye ever been more eloquently sung than on “Neither One of Us” from 1973? And was it the same woman casually tossing off the funny slice of down-home funk, “Daddy Could Swear?” Indeed it was, and greater music was still to come.

The switch to Buddah Records in 1973 gave the group greater artistic control and greater label support. We all know what happened:  “Midnight Train To Georgia.” It’s one of those songs that will never die. As with all of the greatest Knight & Pips hits, there is an unforgettable background vocal arrangement. The Pips are there affirming every step of the way. And Gladys is the personification of devotion. She knows it won’t be easy leaving her world behind. You can hear her gradually summoning her strength (“Ooo, y’all”). But she’d rather be with her man and that’s all there is to it. See also this post on Jazz Music Recordings and Education.

One wonders what Motown’s executives had to be thinking at this time as Gladys and the guys racked up the hits, Grammys, and all manner of accomplishments. Looking back, this peak period may seem brief, but the music endures. Whether it is the basic throw down of “On and On”, the furiously urgent “I’ve Got To Use My Imagination”, the dreamy reflection of “Part-Time Love” or the light disco of “Baby Don’t Change Your Mind”, the group delivers.

This period of fruition at Buddah Records produced one of Gladys’ most remarkable performances. Not many other singers could take a number one hit (by Barbra Streisand no less) all the way to #11 barely two years after the original. Gladys did it with her live version of “The Way We Were”. At the time, Gladys didn’t even know the song was being recorded. Producer Sam Dees, who would work with the group in the 1980s, says that Gladys does something special to a lyric when she likes it. She obviously loves this song. Each line is a pearl of technique and emotional nuance. It isn’t unusual today for soul divas to tackle pop ballads. It’s practically required. Gladys’ interpretation of “The Way We Were” is to me the gold standard.

One can’t overlook Gladys’ on-stage persona when examining her appeal. In her 1997 autobiography, Gladys wrote that she would have been content with being a homemaker. Even as an entertainer, her maternal side is in plain view. She loves to sprinkle her concert with words of encouragement. She just loves to talk. We’ve come to expect it of her over the years. From the enthusiastic “How y’all doin’?” at the top of the show, to a sly “Don’t run nobody over in the parking lot” at the show’s close, Gladys is your good girlfriend.

Author and intellectual Cornel West has said that if Gladys is in town fives nights, he’ll be there five nights. Year after year she delivers her material with total commitment and beauty. Her consistency may strike some as predictable. However, it takes a great technician and actress to convincingly repeat herself. When the screams of “Sing it, Gladys!” are ringing out, you know she is touching somebody.

There is a tendency to slight Gladys’ 80s work for lack of many crossover hits. Though in truth the group recorded some of their strongest material in that decade. “Save The Overtime” and “Love Overboard” are two of the most memorable cuts, but true followers treasure impassioned ballads like “Still Such A Thing”, “Friendly Persuasion”, the seductive “Heaven Sent” and “You’re Number One (In My Book).”

The Pips retired from performing in 1989. The pop chart hits may be a thing of the past. Still, there is the Voice. Still, there are new challenges — acting roles, appearances on Broadway, at the White House, even motivational speaking. Gladys’ most recent release, an inspirational effort called “Many Different Roads”, that coincides with her recent embrace of the Mormon faith, shows her contralto is undiminished in its penetrating effectiveness. And when given a tune as lovely as “Mercy’s Arms” she is exquisite. (Though maybe one day she’ll bless us with the kind of gospel she was raised on.)

One of her grandest solo performances in recent years was another live recording, “The End Of The Road Medley”. With a spoken introduction calling for a return to the musical values she cherishes, Gladys takes Boyz II Men’s classic and makes it her own. It’s no surprise that she would identify with this song about not giving up on love. As her own hit once said, she’s got to keep on keepin’ on.